oh it totally does, but you can’t hear it because space is a vacuum and sound can’t travel through a vacuum!

and that’s a good thing,

because the roar of the sun would clock in at around 120db heard from earth, about the equivalent to having a train’s horn go off three feet from your face.

constantly. all the time, even at NIGHT. there would be no escape.

this is simply terrifying. how do you erase knowledge please ?

NASA actually recorded the sun, if you want to hear it:

And they recorded the planets too:

so, the sun and the earth sound about how i would’ve expected, and a lot of other planets just make strong wind sounds which is perfectly reasonable but venus sounds like pure dread?!?! WHY IS SATURN SCREAMING?!? pluto isn’t bad and is actually kinda nice but it’s very strange to me too like Why Does It Do That. jupiter is super chill 10/10. pluto and jupiter need to collab i would buy that album

TIL that Neil Armstrong, Michael Collins and Buzz Aldren couldn’t afford the NASA life insurance policy. Also, before launch, the three signed hundreds of autographs to be given to their families should they not return so they would have valuable memorabilia to sell.

I don’t think most people realize how terrifying the Moon Landings were. They look back at it, and see this great achievement in human spaceflight but don’t grasp the gravity of the situation. (No pun intended)

OP mentions Michael Collins, who is often forgotten. He was the third member of the Apollo 11 mission, who manned the Command Module whilst the other two landed with the Lander Module. People might hear that and thing he got the short end of the stick, but honestly… I’d argue the opposite. At 20:17:40 UTC on Sunday July 20 1969 the Landing Module touched down on the Moon. Neil Armstrong and Buzz Aldren spent 21 hours, 36 minutes on the surface of the Moon before beginning ascent to rendezvous with Michael Collins in the Command Module.

This is where things get unnerving. The thruster used on the Lunar Ascent Propulsion System used a hypergolic fuel, which is a fuel that spontaneously ignites when the fuel and oxidizer meet. Hypergolic fuels are useful for when spacecrafts need reliable ignition or repeated ignitions, however they’re nasty things. The specific fuel used for this thruster was a mixture of Aerozine 50 and Dinitrogen tetroxide. These are incredibly toxic, and more importantly incredibly corrosive. In fact, they are so corrosive that once you fire an engine you essentially have to completely rebuild it in order to reuse it. This means that the engine on the Lunar Ascent Propulsion System had never been fired before.

That engine was their bridge home. If it failed, they would be stranded on the surface of the Moon. As mentioned the Moon Landing lasted roughly 22 hours. For twenty two hours the two astronauts were on the moon, completely unsure if the never-before fired thruster would even fire up. Completely unsure if they’d be able to go home.

This picture shows the entirety of the human race on January 21st, 1969. All of it except the man who took it, that is. Micheal Collins stayed back on the Command Module during the mission to await Aldrin and Armstrong’s return… or potential lack thereof. This earned him the title “The Loneliest Man in the Universe”. For about 50 minutes for each orbit around the Moon Collins would be out of contact with the earth. That means for about 50 minutes during each orbit he’d have no way to contact any other human, completely alone over 230,000 miles from earth. For roughly 50 minutes during each orbit Collins had no clue whether his fellow astronauts were still alive, and them not returning was a very real possibility. Orders were in place that if the other two could not return to the command module that Collins would return alone.

This wasn’t just some disaster protocol either. This was a very real possibility. Both the astronauts, and NASA were very much prepared for it to happen. So much so that Richard Nixon, the president at the time, had a speech prepared if it were to happen. It doesn’t sugar coat it. It starts off

“Fate has ordained that the men who went to the moon to
explore in peace will stay on the moon to rest in peace.
These brave men, Neil Armstrong and Edwin Aldrin, know
that there is no hope for their recovery.“

If that isn’t bone chilling, then I’m not really sure what is.
People often romanticize space exploration, but back then, and even today, well… this is the reality of it. All of that is what astronauts go through.

Gretchen: On the International Space Station, you have astronauts from the US and from other English speaking countries and you have cosmonauts from Russia. And obviously it’s very important to get your communication right if you’re on a tiny metal box circling the Earth or going somewhere. You don’t want to have a miscommunication there because you could end up floating in space in the wrong way. And so one of the things that they do on the ISS – so first of all every astronaut and cosmonaut needs to be bilingual in English and Russian because those are the languages of space.

Lauren: Yep. Wait, the language of space are English and Russian? I’m sorry, I just said ‘yep’ and I didn’t really think about it, so that’s a fact is it?

Gretchen: I mean, pretty much, yeah, if you go on astronaut training recruitment forums, which I have gone on to research this episode…

Lauren: You’re got to have a backup job, Gretchen.

Gretchen: I don’t think I’m going to become an astronaut, but I would like to do astronaut linguistics. And one of the things these forums say, is, you need to know stuff about math and engineering and, like, how to fly planes and so on. But they also say, you either have to arrive knowing English and Russian or they put you through an intensive language training course.

But then when they’re up in space, one of the things that they do is have the English native speakers speak Russian and the Russian speakers speak English. Because the idea is, if you speak your native language, maybe you’re speaking too fast or maybe you’re not sure if the other person’s really understanding you. Whereas if you both speak the language you’re not as fluent in, then you arrive at a level where where people can be sure that the other person’s understanding. And by now, there’s kind of this hybrid English-Russian language that’s developed. Not a full-fledged language but kind of a-

Excerpt from Episode 1 of Lingthusiasm: Speaking a single language won’t bring about world peace. Listen to the full episode, read the transcript, or check out the show notes. (via lingthusiasm) 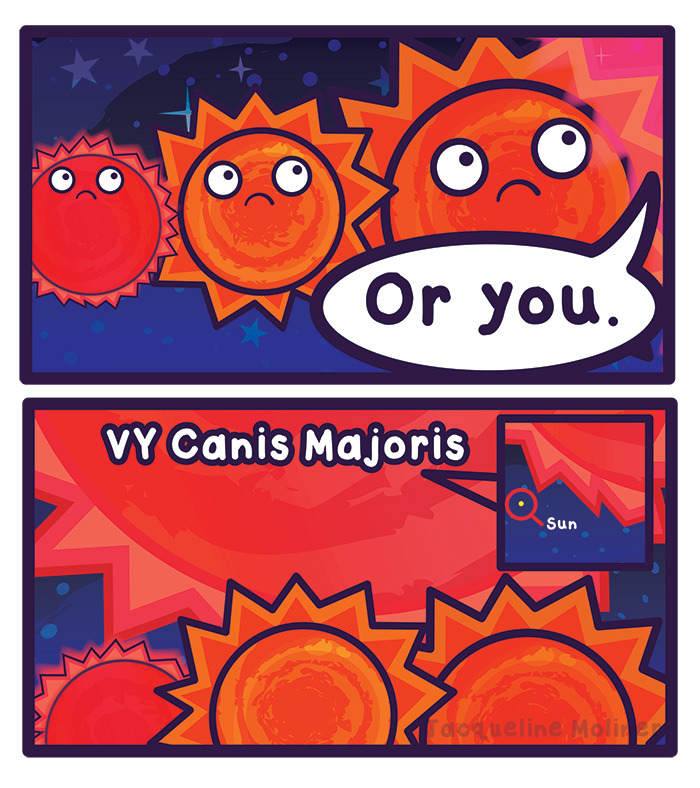 This week’s finale on stars focuses on stellar sizes!

is there a smell comparable to space ? i assume we dont know because we would die if we tried to smell it but thats so cool

yeah if humans tried to smell space just like that, we’d die, no doubt about it

but the smell of space lingers on spacewalk suits, and docking hatches when astronauts open them!

apparently, space itself smells like burning hot metal, or a hot barbeque grill with a slight hint of spent gasoline. The moon, apparently, smells like a gun after its been shot!

The coolest thing about it all is that the smell is actually what are left of dying stars- it’s literally the smell of stardust, and the particles smell like that because they’re so rich in hydrocarbons- something so very essential to life, and speculated by a lot of astronomers and astrobiologists and such to be the very thing life on earth started from!

another neat fact is that no two solar systems smell the same- ours smells like that because our solar system in particular is extremely rich in carbon, and other solar systems and places in the universe will have extremely different smells depending on what elements are most abundant in their system!